be-backs – a term used by artists about visitors to their booths that leave with the phrase “I’ll be back”. It’s a very common parting comment and the people almost never return.

booth sitter – a helper, usually supplied by the fair producers, often a volunteer, that fills in at an artist’s booth so they can take a break.

booth shot – a photograph of an artist’s booth as it would appear at a show. Many art fairs require a booth shot for jurying purposes.

buy-sell – work that has been purchased from another source, usually from a factory outside of the United States, and presented as handmade by the seller.

card collector – a person at a show that goes from booth to booth collecting business cards, often to generate a mailing list for a new show, but sometimes children who just want pictures of artists’ work

crafter – a person who makes work by their own hand, but usually pieces that are not considered fine craft

dolly-in – moving a display and work to a booth location by hand truck rather than driving up.

loosely juried – a pejorative term meaning that the work at a show is poor.

originals – work that is conceived and hand made by the artist

prints – there is a great deal of confusion about this term. An original print is one that the artist alone has made the image in or upon a plate, stone, wood block, silk screen or other material for the primary purpose of creating a work of graphic art. The impression (print) is made directly from that original material by the artist or under his or her directions. (The image doesn’t exist unless it is printed) The term ‘print’ is sometimes used to denote any multiple image thereby muddying the understanding between and original print and a reproduction.

repros (reproductions) – If a work of art already exists (as a painting, watercolor, drawing, photograph, or whatever) and a copy is made, that copy is a second generation or reproductive image; a reproduction.

set up – putting up a display

shit on a stick (SOS) – an art (or other) object that is mounted on a stick and is most often used as a garden ornament. They are popular, pervasive, and easily seen at art fairs because they are sometimes carried aloft by the buyer.

tear down (or break down) – taking down an exhibit

wait list – the list of people that were further down on jury scores than the accepted artists. If there are cancellations (which is common) the show invites the next available artist off this list.

zombies – an audience that walks numbly by booths at a show without moving their heads to the right or left. 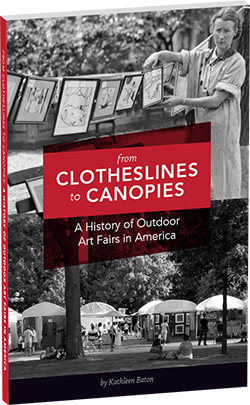